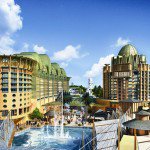 The first of the two new city-state casino complexes has announced to open its doors at January 20. Singapore Resorts World Sentosa – the name of the new casino complex – includes a Festive Hotel, a Hard Rock Hotel, a Crockfords Tower, and a Hotel Michael.

Resorts World at Sentosa will – besides hotels and a casino – include a universal studios theme park and a Marine Life Park, the biggest in the world.

The second casino, the Marina Bay Sands, is scheduled to open in April 2010. The delay is caused by financial problems at subcontractors. The complex is another big investment by Las Vegas Sands Corp., who also owns properties in Las Vegas, Macua, and Pennsylvania.