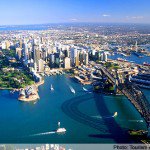 A 30-year old Chinese man was arrested by the Australian police, accusing him of laundering half a million dollar in the casino. The man withdrew the cash in Sydney and immediately took the plane to Melbourne, ending up in the Crown casino.

The cash was withdrawn with a bank cheque that was made out to the estate of a woman that had recently died. The cheque had been reported stolen. The man had mixed the money up with other funds and cashed in and later withdrew the money in an attempt to confuse the origin of the funds. At the end of the night, he walked out of the casino with over one million in chips and cash.

Police is still looking for another Chinese man that is alleged to have helped the man commiting the crime. The two men are probably part of an international organization involved with fraud. The organised criminal enterprises steal cheques from private mailboxes and then try to alter and launder them through false bank accounts opened by runners.