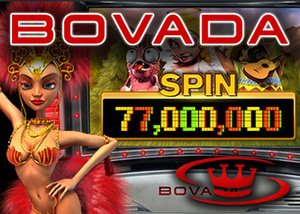 Welcome to one of the most respected casinos around. They are well known for their user friendly interface and high quality games.

Just when players thought it couldn't get any better, there's now news where players can join in and participate in their Bovada casino race, an exciting brand new promotion starting in Fall 2015, leading right into the Christmas season.

Commencing on Monday October 5, 2015, the action will burst into life as the players have the chance to make their way into the casino's list of winners by joining the Bovada Casino Race to 77 Million Slot Spins October.

A whole new casino experience is guaranteed that will line players up for big winnings, as each week they can compete for the big prize money at stake in this unique Milestone Spins Prize Draw.

This exciting new competition will take the player through 11 whirlwind milestones, which will culminate with a grand total of 77 elated winners enjoying over $100,000 in cash prizes, along with weekly match bonuses during the competition period.

All new players are invited to join in the race to 77 million slot spins, and the way to start is by making a minimum wager of $777, starting from October 5 up until the first milestone has been reached, or subsequently two consecutive milestones, to participate in this one of a kind lucky draw.

During the promotional period the casino will also be distributing weekly match bonuses so players can get more bang for their buck. There will be a special 100% bonus match up for the taking, each and every week.

The final prize award for this historic 77 million slot spins contest will see 7 lucky winners walk away with a cool $7,777, and the chance to celebrate the upcoming festive season in style!

During the duration of the competition, all players are urged to frequently check with the bonus page, so they can ensure they claim the weekly match bonus giveaways that can be redeemed for that particular milestone. A minimum deposit of $20 each week is all that's required, so there's no point in leaving cash on the table, if wanting to maximize winnings.

For each milestone hit, 7 players each receive $777 and the 7 winners of the 77th Million Slot spin each collect a whopping $7,777! The Bovada Casino Race begins on October 5, 2015 at one minute past midnight ET, on your marks, get set, go!