Improbable Football Bets that Came Off 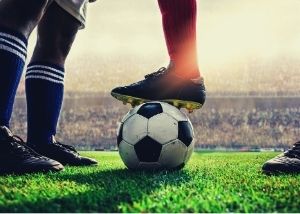 Football is the most popular sport in both the United Kingdom and the world generally, and betting on it is big business. But what are the winning bets with the longest odds in history? Read on to find out.

Football fans with a penchant for slots can match the two with the Football Legends slot machine. As the name implies, this game of reels features heroes from the world of football, including famous names such as Michel Platini, Bobby Charlton, Franz Beckenbauer, and more. There are scatters and free spins and, if you're feeling very lucky, the Gamble feature offers the chance to play double or quits after you have a winning spin.

Speaking of football legends, Liverpool have a certain special relationship with the Champions League. But perhaps none of their wins was quite so special as in 2005, when they faced Milan in the final (hosted in the Atatürk Olympic Stadium, Istanbul). Milan were favourites going into the match and scored first. And second. And third.

By halftime, Liverpool were 3-0 down and some of their fans were leaving the stadium to catch an early flight back home. Meanwhile, the odds on a Liverpool victory had ballooned to 188/1 with some bookies, a bet a few faithful, perhaps forlorn, fans decided to back.

Remembering the past is useful, but the results of yesterday and those of the future can vary a lot. Click to find some of the best football predictions today which should prove useful if you enjoy betting on football, or even if you just want to chew the fat and discuss the state of play in the sport. If you are betting, always remember to only bet what you can afford to lose and weigh up odds at various bookies/exchanges, as they can sometimes vary quite a bit (and some markets aren't available everywhere).

Money talks in football, and success begets success. It's why certain teams have had such dominant streaks (Sir Alex Ferguson's Manchester United springs to mind), and why you can generally pick the top 4-6 of any given season based on what happened last time around. It's also why Manchester City had short odds of winning this year even when they were some way off the top spot (at the time of writing, they lead the English Premier League). Individual matches and knockout tournaments throw up surprises, leagues do so far less rarely.

Except for that one time. That one time when a team that wasn't just an outsider or underdog, they weren't even on the radar of punters, bookies, or pundits until something bizarre and fantastic happened. In 2016, Leicester City, who had barely survived a relegation struggle the season before, came from nowhere to win the EPL. Now you might think the shock of this has been overegged. But when you see the odds of 5,000/1 and realise that a man wagering a week's wages (don't bet that much, incidentally) will have made a profit worth a century of work, it brings home how unlikely this victory was.

Prior to Leicester City, every Premiership champion had been in the top 3 the year before. In 2015, Leicester finished 14th of 20, just six points out of the relegation zone and with fewer than half the points of Chelsea (that year's champion). It was the unusual counter-attacking style combined with an unshakeable self-belief that allowed Leicester City to weather the inevitable ups and downs and remain firmly focused on their unlikely goal. Unlikely, but ultimately achieved to the dismay of bookmakers and delight of their fans.

From kings of the pitch to Serengeti Kings bettors who like casino games alongside sports betting will enjoy indulging in the big cat-themed slot from industry giant NetEnt. The Serengeti has starred in countless wildlife documentaries thanks to its stunning array of wild animals, and players of the slot have the evocative background in addition to multipliers, free spins, and scatters to enjoy.

Greece weren't in a great place in 2004, ranked only 40th in the world heading into Euro 2004, where they had winning odds of 150/1. And yet from the off, things seems to turn in their favour.

Portugal, with the lauded Cristiano Ronaldo on their side, was looking good to take the win as hosts and a hot favourite. Their first match was against Greece, and was a formality on paper. On the pitch, however, it was a different story. Defying all expectations, Greece beat Portugal 2-1. In the end, Portugal topped the group and Greece squeezed through as runners-up, ahead of Spain on goal difference. But a marker had been set.

Greece beat title holders France in the quarters and faced a much fancied Czech Republic side in the semis, before advancing to the finals where they encountered Portugal, again. And it had the same result, yielding a famous match and tournament win for the rank outsiders who became champions of Europe.

Alonso Scores from his own Half

Outstanding league and tournament wins are one thing, but sometimes it's the little things that can prove very lucrative for sports bettors. We return to Liverpool for a straightforward but improbable bet with odds of 125/1. It was on Xabi Alonso, a midfielder, to score from his own half against Luton Town in the FA Cup. One eagle-eyed fan had noticed the midfielder had developed a habit of the speculative shot last year, and backed him, with the bet coming good.

Grandparents always like to dream their grandkids are going to be astronauts, or doctors, or play for their national side one day. Harry Wilson's grandfather, Peter Edwards, was so confident in his precocious grandson that he placed a bet on him playing for the Welsh national side when his grandson was still a toddler.

That just about concludes our little list of inspirational long odds football bets that ended up paying off big time for those smart, or lucky, enough to make a wager.