A Quartet of Top Slots Machines in Blighty 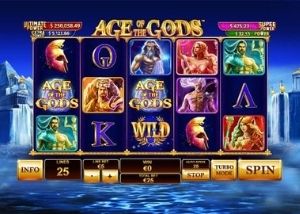 The United Kingdom is one of the foremost betting nations in the world, with liberal legislation, great regulation, and plenty of top sites. But what are some of the most popular slots games among British players? Read on to find out.

Age of the Gods

Certain themes are recurring favourites in the realm of slots, and Greek mythology is among the most popular with slots such as Achilles and the snake-haired gorgon Medusa. Age of the Gods is the name of the original game that started a series of eponymous linked slots by software giant Playtech (later entries focus on particular gods, such as Zeus, and branch out in other mythological realms, like Asgard). So if you like this game there are lots of similar ones to enjoy too.

There's a standard 5x3 reels arrangement, and if you're lucky enough to get a quintet of wilds on a payline you can make 10,000x your stake. Plus there are free spins and multipliers too. But the key draw of Age of the Gods (and the series it spawned) is the progressive jackpot. This six figure sum gets a little bit bigger every time there's a spin but the jackpot isn't won, but if Olympus favours you then you could win a prize big enough to buy yourself a new house.

Gladiator came out all the way back in 2000, when Blair was still in his first term, and financial crashes and pandemics were things that happened a century ago. The film was very well-received and won multiple awards including the Academy Award for Best Picture and the BAFTA for Best Film. Although the plot came with a good deal of creative licence, the character of Commodus was a real-life emperor. And, just like the film, he was a murderous, incestuous narcissist with a penchant for gladiatorial combat.

The film's huge popular appeal likewise makes it a natural choice for slots, where the famous faces of the characters are to be found on the 5 reels (the game comes with 25 paylines) of this Playtech slot. Get a trio of Colosseum scatter symbols and free spins and multipliers will increase your chances of a great result.

If you do end up winning then there's a double or nothing optional Gamble feature. Pick a colour correctly and your profits are doubled, fail and you lose your winnings. Like Age of the Gods, Gladiator also comes with a tasty progressive jackpot. 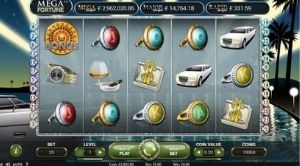 What's better than one progressive jackpot? Multiple progressive jackpots. And that's precisely what players can try and win with the aptly named Mega Fortune slot, by NetEnt. Bling galore peppers the 5 reels, with yachts, limos, jewellery, and the like comprising the array of symbols.

Pop champagne scatter symbols and you'll be gifted with free spins and multipliers up to 5x. Wilds are present too, in the form of the yacht. Bag yourself a quintet of these and a 10,000 coin prize is yours. And there's an interesting extra mini-game courtesy of a trio of bonus wheel symbols, involving spinning a wheel for guaranteed cash prizes.

The three progressive prizes are name the Rapid, Major, and Mega jackpots. If you're fortunate enough to win the Mega jackpot that could mean a seven figure payout.

British players who are looking for somewhere new to spend their time and are hunting for a top online casino UK have a large number of options. Welcome bonuses like no deposit spins provide a golden hello and there are hundreds of slots to play for major prizes- including progressive jackpots. Card sharks are catered for with regular and live versions of blackjack, roulette, and more, with other categories including virtual sports, and bingo. 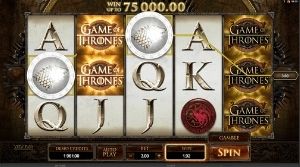 Game of Thrones was the biggest TV series in the world, bringing grimdark fantasy to a vast audience for seven scintillating seasons (before rather dropping the ball with the eighth...). Based on George RR Martin's excellent A Song of Ice and Fire book series, the TV show, named after the first entry, became a decade-long cultural phenomenon, and today is one of the most popular slots with UK players.

Created by prolific software developer Microgaming, there are two versions of the Game of Thrones slot. The better one comes with 243 ways to win, maximising the chances of a player coming out in the black. Fans of the show (or books) will be familiar with the Westerosi houses, whose crests form many of the symbols. There are up to 18 free spins accompanied by multipliers up to 5x for those who get the right combinations of Iron Thrones and Baratheon, Stark, Targaryen and Lannister house symbols. Get the Game of Thrones logo to benefit from a wild that can be stacked to fill a whole row.

Multiple rounds of double or nothing are available when you win, with four chances to lose out or double your winnings (at any time you can decide to quit while you're ahead and keep your profits).

Online slots are the most popular draw at betting sites, but it's not so long ago that you could only play slots in person, at a land-based casino or in a pub. These machines are still around, although far less convenient than their internet equivalents thanks to four out of five British adults owning smartphones.

Dating back to 2006 is JRM's Cash n' Curry, an Indian themed pub favourite. The jackpot is £250, and it comes with features such as trails, nudges and holds.

Deal or No Deal is a common live casino game, but also a land-based slot machine (several, in fact). British fans of the gameshow can take their seat and see if the Banker, and chance, is going to be kind. Other popular casino gameshows include Monopoly (live dealer) and the Wheel of Fortune online slot machine.

Last on our mini-list of real world slot machines is Pub Fruity, crammed with the stereotypical fruit machine symbols of lemons, watermelons, bells and so forth. Free spins and nudges are featured, as is a brunette barmaid and a £500 jackpot.

We hope you found this quartet of popular British online slots (and a few real world games found in pubs and brick-and-mortar casinos) interesting. The big jackpots are pretty appealing, but always remember to keep an eye on your bankroll.