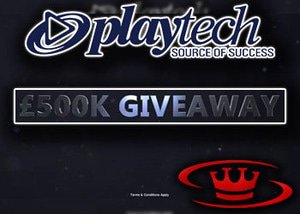 Playtech launched its biggest ever network promotion scheduled to run over 28 days.

The massive cash giveaway worth €500,000 coincides with the launch of Super Hero themed games including three Superman movie titles inspired by the 1978 Superman, 1980's Superman II and 2013's Man Of Steel, which ran across the Cheltenham Festival last week and is already generating record numbers. You can take advantage with an exciting Playtech no deposit bonus from Ace Kingdom Casino!

This €500,000 Playtech promotion follows the huge success enjoyed last year when the first series of the DC branded titles were launched and celebrated. Four draws are part of the independently adjudicated €500,000 cash giveaway. The four weekly draws consist of one featuring prizes worth €200,000 while three offers prizes worth €100,000. Hundreds of smaller prizes are up for grabs while the headline prizes are worth €5,000.

Participation is easy, and every wager of €10 on games including new and best-performing titles awards one ticket into the lucky cash-giveaway draw. Games part of the promotion include Plenty O' Fortune, Age Of The Gods, Buffalo Blitz, Halloween Fortune, Space Invaders, Green Lantern, Man Of Steel as well as Superman I & II. There is no limit on the number of entries allowing participants to have an unlimited number of entries and an unlimited number of prizes can be won.

Playtech Fans Have More To Look Forward To During Football Season

After the conclusion of the €500,000 Playtech cash giveaway, another promotion is planned to coincide with the start of the new football season. Playtech's COO, Simon Akad shared their delight in announcing its largest ever network promotion across all casinos part of the Playtech network. Akad also thanked participating licensees for their support in ensuring the success of the biggest cash giveaway ever.

Delivering over 50 new titles annually as well as hosting innovative features across regulated markets, Akad mentioned that there are no other software suppliers that have the capacity to deliver the same level or speed when it comes to offering players a fresh and diverse range of gambling games. Meticulous planning across the past nine months included strategically scheduling of marketing promotions, and Playtech is looking forward to offering fans fantastic promotions during 2017.

Anyone registering a new account at Ace Kingdom Casino can use a $10 Playtech no deposit bonus. Once ready to deposit a bonus of 200% up to $300 is waiting to join your first deposit as is a 50% bonus and 75% bonus on second and third deposits. Thereafter, you can look forward to Wednesday Spin Collector that will add one free spin for every $20 wagered. Sunday Spinback will add one free spin for every $1 lost, a maximum of 20 free spins will be awarded. Register today!