Video Poker is the ideal game to play at online casinos. They give better payout ratios then the land based casinos, and often include some nice bonus features. The game is very simple, and is not played against other players like it is with Hold’Em. 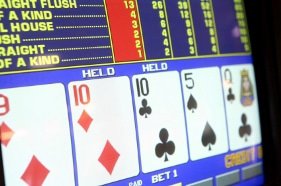 The history of the poker game is very uncertain, and there are many stories going around. The popularity has always been high, the game was frequently played in the Wild West and is still very popular these days. Poker can be nice to play with friends, but the casino has also provided you with the opportunity to play it against the computer, such as with video poker.

The game is very simple. First you have to place you bet, and then the machine will deal you five cards. You now get the chance to choose which cards you want to hold and which ones to discard. The machine will then deal you new cards for the ones discarded. You will then get paid according to the combination of cards you have. The possible combination will now be shown.

Four of a kind:
Four cards of the same value

Full House:
Combination of Three of a Kind and One Pair

Three of a kind:
Three cards of the same value

One Pair:
Two Cards of the same value

The payout ratio for the combinations above can differ between casinos, but here is a typical scheme.

Good luck at the poker tables!