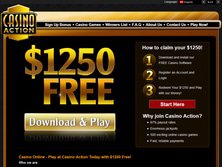 Casino Action is a European online casino which strives to provide the highest quality entertainment within a secure environment. Its promotional offers are supposed to stand out and among the various deals that can be found on the web. The venue offers five hundred games that can be played at any time. Some of these games have rather extraordinary features. The jackpots are obviously the biggest attraction. Microgaming games are also a major attraction, since the software maker is known for offering titles that attract players.

The Casino Action Bonus deal is fairly generous. The players can receive $1250 after completing a three-step process which involves downloading casino software, registering an account and reedeming the money. It is one of the better casino bonuses out there. The bonus can be used in order to access the casino games. Unfortunately, the casino has not revealed any other promotions. Other online casinos typically have a few supplemantary deals, which makes them a whole lot more attractive to players.

The visitors can expect all transactions to be secure. They can count on industry standard encryption as well as eCogra endorsement. The transactions can be conducted through the following services; Neteller, Visa, MasterCard, PaySafeCard, Skrill, Visa Electron, Trustly, Instant Banking, EntroPay, etc. The website features a nice loyalty program, which isn't just limited to a single casino site. In fact, the points collected at any partner casino get added together. One hundred loyalty points is equal to a single dollar in chips. The players join the program in an automatic way. The mere fact that money has been wagered is enough. Fairness is ensured by the presence of random number generators and other technology which is typically utilized for that purpose.

The list of contact numbers for various countries shows that the casino is willing to accept players from all over the world. There are special phone numbers for players from the following countries; Canada, United Kingdom, Denmark and Germany. There is also a distinct number for players from other international locations. The casino's services are especially appealing to European internet users.

Most Popular Games at CasinoAction

The website my be attractive to fans of progressive slots. Here are the available sixteen titles in that category; Mega Moolah, King Cashalot, Major Millions, Carribean Draw Poker, Triple Sevens, Roulette Royale, Fruit Fiesta, Jackpot Deuces, LotsAloot, Wow Pot, Progressive Cyberstud, Cash Splash, Treasure Nile, Tunzamunni, Poker Ride & SupaJax. A huge winners list shows up on the website. Specific games are mentioned next to the names of winners. It turns out that some large amounts of money have been picked up with games such as; Beach Babes, Happy New Year, Multiplayer Avalon, Dragon Dance, Adventure Palace, Crazy Chameleons, Game of Thrones, Bust The Bank, Keno, Break Away, Dolphin Coast, and many others!

There is definite support for the casino from the players. Good opinions abound. The isolated complaints have to do with the payment of winning amounts. At the same time, the vast majority of visitors do not report any troubles. Therefore, it would be unwise to tarnish the reputation of the venue based on a few complaints, especially since there may have been legitimate reasons for withholding the payments.

The license comes from the Kahnawake Gambling Commission. This is one of the first gambling jurisdictions. Over the years, the body has gained a good reputation. The casinos that fall under its authority gain much as a result of the association. Unlike other licensing bodies, Kahnawake is known for tough regulation.

It would be nice if the Casino Action promotions section had more deals. I was disappointed by the lack of options. The welcome bonus was quite a treat though! I wasn't disappointed by the games on the site. Since I love progressive slots, I could enjoy hours of entertainment! I believe that the casino can fulfill the needs of European players who would like to try something new. 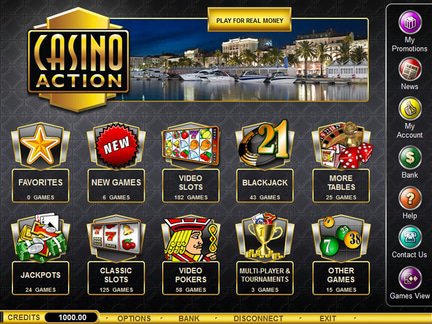