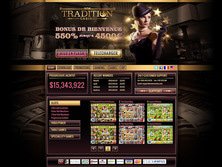 Tradition Casino lives up to its name with a classy 1920s theme. The bonus offers though are bang up to date. To start with, you can get 15 free chips in modern denominations with our exclusive no deposit promo. No coupon or voucher code is necessary to claim this bonus. Once you are ready to pay in some of your own cash, you can take advantage of a huge Tradition Casino bonus which is spread over your first three deposits. You get 200% on your first deposit (up to $1600), 100% on your second (up to $400) and 250% on the third amount you pay in (up to $2,500). Again, this promo can just be claimed by a quick chat with customer service after depositing - No need for any coupon or voucher codes.

Hopefully you won't exhaust all the free funds, or your own, too quickly. When the time comes to deposit again though, there are further tempting incentives to make it worthwhile. This brand offers a number of packages, all named after cities. Depending on how much you pay in, you can get a generous deposit match, some cash back on your deposit and a period of free play. This no-cost slot play incentive is a little different to the normal free spins offers you might have used at other sites. Instead of free spins you just get an amount of time for which you can play without paying. With the Berlin package for example, you get 10 minutes of free play.

In addition to the bonuses, this company also offers a four-tier VIP program, with the lowest level being open to anyone having made a first deposit. Each level is named after a color and members can progress through red, black, gold and platinum levels for a range of extra VIP benefits. All of this adds up to quite a range of incentives for new members although there is not as much variety as some competitors, such as Casino Midas offer. However, the Tradition Casino bonuses which are offered are of a higher overall value.

Sadly, this brand does not as yet offer any mobile app, so it's not going to be easy for iPad, iPhone or Android users to gamble on the go. Of course you can always try using the instant play version of the software, but it's not really optimized for mobile devices.

As one of the relatively small number of online gaming providers accepting US memberships, Tradition Casino has understandably become popular with US based gamblers. Interestingly, a high proportion of the membership is made up of players in France. Unfortunately membership is not currently accepted from people residing in Canada.

Powered as it is by Rival software, there is a wide range of games to choose from in Tradition Casino's portfolio, over 140 in fact. For slot lovers, there is the iSlots line-up which is exclusive to Rival. Then there are classic three-reel slots and also the more interactive video slots. The most popular titles played here are Nuclear Fishin', Hole in Won and Moonshiner's Moolah. Video Poker fans can enjoy variants including Double Joker, Deuces Wild and Aces and Faces. The most popular table games are here too, along with some less common ones such as Caribbean Stud Poker, Let it Ride and War.

At the time of review, the progressive jackpot displayed on the site's home page was running at just under $128,000. Recent notable winners include Laetitia F. who won 5425 Euros on Joker Poker, Gloria P. from the USA who won $8815.50 on gnome Sweet Home and Dave N. Also from USA who won $3600 playing Tahiti Time.

A few complaints exist around the piece, mostly relating to a lack of response, or else a poor response from customer support. A few of these issues also appear to remain unsolved. This is something the company ought to address in fairly short order. Customer support issues don't do much to encourage new membership, even given incentives such as no deposit bonuses. In light of these existing and unresolved issues, I consider 3 out of 5 to be a fair rating in terms of complaints and handling.

Tradition Casino has been in business online since 2009. The site is owned by Silverstone Overseas Limited and is licensed in Curacao. The Curacao licensing jurisdiction is not known for its strength, particularly in terms of handling customer disputes. There are some reports to the effect that things are improving in this regard though.

My $15 no deposit bonus lasted a bit longer than usual. Not only because it was $5 more than most similar bonuses, but also because of a luck run on Gushers Gold, one of the colourful Rival video slots. Unfortunately it wasn't enough for me to be able to meet the play-through requirements though, so I had to go on and pay in some of my hard earned cash. A date with some of the absorbing iSlot titles followed, with Cosmic Quest II: Mystery Planets keeping me busy for some time. Although not good for my bonus play-through, I also spent a bit of time trying my hand at Red Dog and Casino War. These particular table games don't get offered by all gaming providers so I thought I'd give them a try. The slots and table games all played well as you'd expect from Rival software (although I didn't profit). I also liked the roaring twenties theme which added a bit of atmosphere to my gaming time.

I didn't go on to make use of any City packages for the free playing time, but I particularly like the idea of this novel offer, which gives you a little bit of extra fun on top of the bonus match and cashback. This is not an offer you see on many competitor sites and is similar to getting some free spins. All in all I'd rate this provider as 4 out of 5. If there had been an app for iPhone, iPad or Android mobile use I would probably have given it 4.5. Hopefully this is something which will be added in the near future. 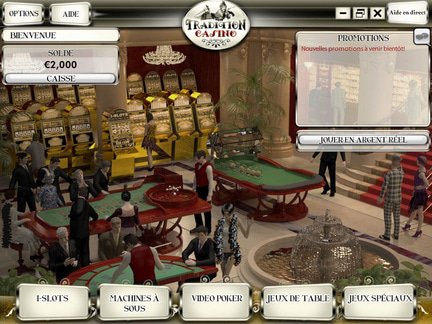